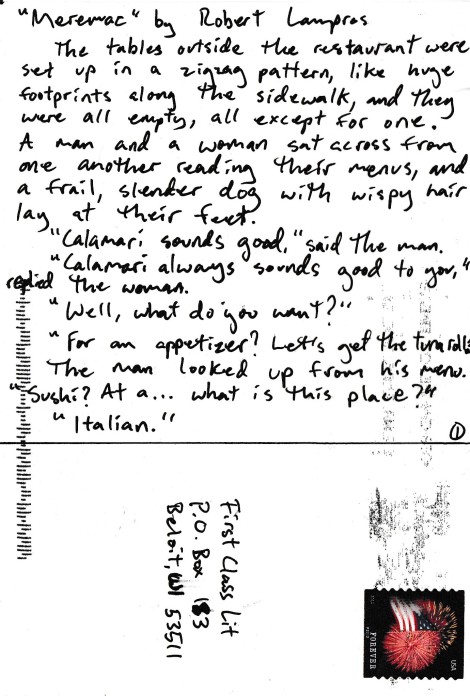 The tables outside the restaurant were set up in a zigzag pattern, like huge footprints along the sidewalk, and they were all empty, all except for one. A man and a woman sat across from one another reading their menus, and a frail, slender dog with wispy hair lay at their feet.

“Calamari always sounds good to you,” replied the woman.

“For an appetizer? Let’s get the tuna roll.”

The man looked up from his menu. “Sushi? At a… what is this place?”

“At an Italian restaurant?”

“You never know,” said the woman. “It could be delicious.”

“I’d rather get the calamari,” he said, and reached down to scratch the dog’s neck behind its thin, floppy ears.

“Your call,” she said, closing her menu. “I’m having the lemon orzo and the chicken caesar salad.”

At that moment a car screeched to a halt in the street, thirty or forty feet away from the couple’s table. It was bright out, mid-afternoon, and the man and woman both had to shield their eyes from the sun to see why the car had stopped so abruptly. An old lady stood slightly hunched in the middle of the right lane, one hand on top of her white hair while the other hand pointed up at the clear blue sky.

The driver of the car, who’d been blaring the car horn for a good ten seconds, released the horn and yelled out the window, “What’s your problem, lady?”

She didn’t move, just kept holding the top of her head and pointing up at the sky.

The driver opened the car door and stepped out to see what the old lady, and now also the man and woman at the table, were staring at. Way up in the sky, a commercial airplane was climbing straight up into space on a path perpendicular to the surface of the earth. The plane’s engine was functioning at maximum capacity or close to it, as the vapor trail billowed out beneath it and made a stripe like meshed cotton balls. The plane gradually grew smaller, a silver cross with tired arms, until only the vapor trail remained, and the man and woman escorted the elderly woman out of traffic and over to their side of the street.

“Oh, my goodness gracious,” the old lady said, fanning herself with her hand. “What in the world…”

“I’ve never seen that before,” said the man. “Strangest thing.”

“That plane took off like a space shuttle,” said the woman, squinting up at the now hazy vapor trail.

“What in the world…” the old lady repeated.

“They’re charting flights to the moon now, I suppose,” said the man. “Call United, honey. Let’s spend next summer at the Sea of Tranquility.”

“What would we do with Rudolph?” asked the woman. The dog’s left ear twitched under the table.

“Leave him with your sister,” said the man, “like we did last Christmas.”

“What in the world?”

Robert Lampros is a writer of poetry and fiction who lives in St. Louis, Missouri.  His books include Fits of Tranquility, Afternoon, Illuminating Sidewalks, and Eleven Floors, Part I.